In 1996 the Foundation’s Board of Directors, following the painstaking efforts made by its Vice
President and current President, Professor C. Zerefos, and the then Secretary General of the UN
World Meteorological Organization (WMO) Professor G.O.P. Obasi, opened a special account in
Geneva designated as: “WMO Professor Mariolopoulos Trust Fund Award”. This account is intended
to fund a Prize awarded under the auspices of the World Meteorological Organization (WMO) of
the United Nations in memory of Academician Elias Mariolopoulos.

The establishment of this special Fund, as indicated in the proposal made by the Secretary General
of the World Meteorological Organization, Professor G.O.P. Obasi as well as in the resolution of
the Council of the World Meteorological Organization cited below, took place with the aim of
honoring Professor Mariolopoulos’ prominent contribution to modern Meteorology and Climatology,
especially in Greece. The Fund has set up a biannual international prize, starting in 1998, titled
“WMO Professor Mariolopoulos Trust Fund Award”. The prize is awarded to young scientists (up
to 35 years of age on the date of the publication submitted for the award) for a prominent study
regarding research in atmospheric sciences, published (or accepted for publication) in a scientific
journal with reviewers in the preceding two years. Studies which have already received an award
are not acceptable. The proposals and studies are submitted in one of the WMO’s formal languages
(English, French, Spanish and Russian) or in Greek. The studies that are not written in English are
accompanied by a translation in English.

On the Review Committee, which works with an international system of reviewers, there are eminent
scientists from the World Meteorological Organization, the European Union and the Foundation’s
Board of Directors. The Secretary General of the World Meteorological Organization and other
eminent personalities are members of the Award Committee. The “WMO Professor Mariolopoulos
Trust Fund Award” is the first award of a United Nations Organization that is presented to honor the
memory of a Greek scientist.

Below is the relevant extract of the Executive Council of the World Meteorological Organization
(WMO):

Extract of paragraph 7.2.6 From the final Report of the 47th session Of the Executive Council Of the
World Meteorological Organization Geneva, 1996

7.2.6 The Council noted with appreciation the proposal to establish a Trust Fund to commemorate the distinguished contributions of the late Professor Mariolopoulos to modern meteorology and  climatology particularly in Greece, his native country. Beginning in 1996, the Trust Fund would provide every second year an award to stimulate research and understanding of the atmospheric environment. It was agreed that for this Trust Fund, the Secretary-General representing WMO would make the decisions concerning the evaluation of candidates and the utilization of financial resources (see Annex VI) in collaboration with the Mariolopoulos-Kanaginis Foundation (MKF).

This agreement was renewed for another 20 years in a contract signed between the Foundation
and the new WMO Secretary General Professor Petteri Taalas on February 23, 2016.

The Foundation Board awards the Foundation’s Gold Medal of Excellence to prominent personalities
who have predominantly contributed to the promotion of Environmental Sciences.

The Gold Medal of Excellence bears a representation of the mythical Europe on a bull as she is
depicted on a medal that comes from the so-called treasure of Abouquir or Alexander the Great’s
treasure (Archaeological Museum of Thessaloniki). 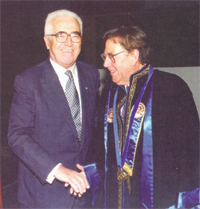 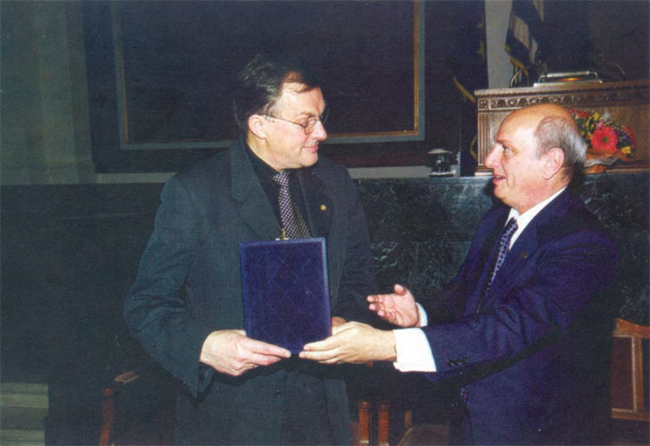 The Vice Chairman of the Foundation and Director of the Laboratory of Atmospheric Physics, Professor C. Zerefos presents the late Professor I.S.A. Isaksen with the Foundation’s Gold Medal of Excellence.

In memory of the late Professor of the National Technical University of Athens at the Department of Chemical Engineering, Ioannis Ziomas, the Board of the Mariolopoulos-Kananginis Foundation for the Environmental Sciences and the Atmospheric Physics Laboratory of Aristotle University of Thessaloniki decided to present an award to a young scientist who was selected among those who participated as first authors at the COMECAP 2018 Conference. For this reason, a selection committee was set up by Christos Zerefos, Academician, Panagiotis Nastos, Professor at University of Athens and Chairman of Hellenic Meteorological Society (HMS), and the Aristotle University of Thessaloniki Professors Alcibiades Bais, Demetrios Melas and Demetrios Balis. The selection committee decided that the award be shared by the following young scientists: