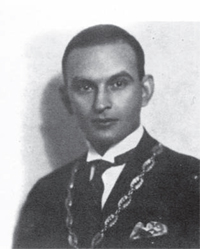 (1900-1991) Elias Mariolopoulos was born in Athens. He studied at the Physics and Mathematics School of Athens University and later attended a scholarship at the University of Cambridge from where he got a Master of Arts degree. He then received a Diploma of Meteorology from the Meteorological School of the Imperial College of Science and Technology in London. Afterwards he enrolled at the University of Paris from where in 1925 he received the diploma Docteur de l’ Université de Paris, Sciences, as well as the state French diploma Docteur ès Sciences Physiques. While he was studying, he worked for the British and French Meteorological Services.

The Conference of the International Commission of the Higher Atmosphere. Sir Napier Shaw seated among representatives of the Mediterranean countries. Elias Mariolopoulos is the first on the left (Leipzig, 1927).

When war is declared, he is recruited as a reserve lieutenant and assumes the command of a team of meteorologists in the Air Force Staff. Mariolopoulos was exceptionally active in the National Athens Observatory and he established a service for the measurement of Atmospheric Electricity for the first time in Greece. He also founded a special Radiometric Station in Hymettos, as an annex to the National Observatory of Athens. At the University of Athens he directed dozens of doctoral theses.

Besides his administrative and organizational work in all of the public posts he assumed, his research work is equally important. The recognition of his work by his foreign colleagues is evident from the fact that he was elected Vice President of the International Climatology Board from 1931 until World War II. He was also elected a member of the International Commission for the Higher Atmosphere and the International Committee for Agricultural Meteorology. In acknowledgement and reward of his work, the Academy of Athens elected him its regular member in 1965 and President in 1973.

Elias Mariolopoulos was one of the pioneering scientists in his field who were concerned about the impending deterioration of the atmosphere from the thoughtless activities of modern man and in the mid-1960s, for the first time in Greece, he launched measurements of certain atmospheric pollutants by the Meteorological Institute of the National Observatory of Athens.

After his retirement from the University, he does not acquiesce but instead proposes to the Academy of Athens the foundation of the Research Centre for Physics of the Atmosphere and Climatology which is founded in 1977 and which he organized in collaboration with the Centre’s first Director, C. Zerefos.

For his action and his scientific and social contribution, Mariolopoulos received many Greek and foreign honorary distinctions: 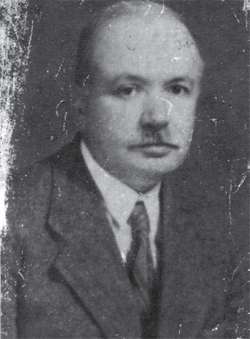 (1880-1947) Petros Kanaginis was born in Constantinople but descended from Pirgos, Tinos. He graduated from the Practical Lyceum and enrolled in the Physics and Mathematics School of the University of Athens. From 1902 to 1905, he studied at the Agricultural School of Gembloux, Belgium as a scholar of the Greek state. In 1906 he was hired as Manager at Zografeia estate in Trikala, where he stayed for 7 years. There he implemented rice cultivation for the first time with great success.In 1907 he gets married to Eugenia Versai with whom he had his only daughter, Ekaterini-Nina. In 1913 he is appointed a member of the Refugee Rehabilitation Committee of Macedonia-Thrace and in 1914 he takes on his duties as Chief of Agriculture in the General Administration of Macedonia. Afterwards, he was appointed Prefecture Agronomist and offered his services mainly in Macedonia and to the Interim Government of Thessaloniki. He mainly helped in the rehabilitation of refugees and in the introduction of new methods of cultivation as well as in expanding the use of the iron plow and harrow, which were barely spread at the time. In 1916, he helped in the foundation of the Settlement Directorate in Thessaloniki and of the Settlement Department in the Ministry of Agriculture in 1917.

The political rivalries of the time led to his dismissal from service in 1917 and 1920. In 1920, he organized a scientific rice cultivation initially in Ammos estate and later in a part of Karas-Tsalis estate in the region of Veroia. In 1922, he assumed the duties of Settlement Director General and in essence he was responsible for the rehabilitation of thousands of refugees from the Asia Minor disaster. In 1924, he was appointed a member of the Mixed Commission for the exchange of Turkish and Greek populations. Additionally, and while he was officially the Director of the Athens Agricultural School at the time, he was appointed Director of Settlement in the Ministry of Agriculture. In 1929, P. Kanaginis was appointed as Technical Advisor in the Ministry of Agriculture with the rank of Director General. During the same period, he handled the resolution of the Kopaida issue and for this purpose he went to England. In October 1930, he was detached and took over the management of Chrisafis’ “Kilidir” model estate, in Macedonia. In 1932, he will return to the position of Director General in the Ministry of Agriculture.

In February 1936, he undertook all the agro-economic research of the country and the supervision of all Agricultural Institutions. In 1941, he was dismissed from public service due to the abolition of his position and in the period from 1943 to 1947, the Ministry of Economics assigned him with the supervision of Foinikia-Trapourgia farm estate (in Doriko region). Finally, during the German occupation, he will undertake initiatives and will participate on Committees in order to relieve the population from famine crisis.

P. Kanaginis, as it is generally recognized, was mainly a man of action and a tireless proponent for the rehabilitation of landless farmers and refugees. As he mentions in a letter he sent on March 7, 1926 to P. Dekazos (then Director of the Agricultural Society, who had also carried out the difficult task of rehabilitating landless farmers in Thrace and elsewhere), “[…] in Greece we lack neither people with good programs, nor those who are able to work for their implementation, but what is missing is the perseverance to carry them out not only when things go well but especially when difficulties are encountered”.